Great upgrade for my open floorplan. I started with a dot and worked my way up until I had the previous top model (3" woofer and .8" tweeter) paired with the matching sub. While that pair was great across the spectrum, the soundstage was off due to the sub sitting against the wall, rather than next to the echo. I had reservations that the front firing tweeter on the Studio wouldn't disperse well from the center of the house, however that isn't an issue. The studio sits on my kitchen bar and points away from the kitchen. It does great at filling the central part of the house with music, including the kitchen "behind" it. Had I not done my research, I probably wouldn't have realized it had a front firing tweeter, vice up or down.I moved the sub into the master bedroom where it's near that echo. This added the low end to the bedroom without the spatial blur of the sub sitting away from the mids/highs.Back to the Studio... it delivers premium sound to the bulk of my first floor and now that the woofer is integrated into the echo, the soundstage is no longer off/annoying.There has been a steady improvement in audio quality over the past several models and generations, now that the Studio delivers premium sound in a single package... I'm not sure where will go next. I'd buy a smaller future device IF it delivered equal sound quality. I am not interested in sacrificing range or depth for size though. The Studio fits fine on the bar and I can crank it up when the wife is out.Considering the Studio is full range in a single device, I am very pleased with the pricing. If offers any holiday deals, you should definitely give in and upgrade to at least one studio. If no deals soon, give in and pay full price like I did. I think it's still a bargain at full price.For comparison, downstairs I have the studio, a premium echo with sub paired, another premium, 1 echo in the garage, and dots in the kids' rooms. I guess towers will eventually work their way into the kids' rooms... upstairs I run Monitor Audio Silver 7.2 with SVS cylinder subs and I still have a dot hooked up to my receiver to listen to audio commands.Well done . Oh, one final nod to incorporating a spectral automatic equalizer to immediately adjust the Studio's audio output to match it specifically to your room's configuration.

T
T.J.W.
For the Money Incredible!

I am very pleasantly surprised. I have an Echo Plus which I thought sounded good (but it's mono). I'm a big-time audiophile. My home theater subwoofer is a Velodyne SPL-1200 II (1000 Watt with a 12" Kevlar cone), my main speakers are hand made with RAAL electrostatic ribbon tweeters and solid bamboo cabinets - five identical. Point being, I enjoy good sound and I have a very picky ear. I like full range clarity and balance. More than anything, I'm tired of wires at my home computer workstation, I've tried so hard to simplify things. My Bose Companion 20's are incredible but they're cumbersome, top-heavy and require way too much wiring.Problem is, no single speaker I've tried has had the sound-stage two or more speakers can have. So I decided to try this... Awesome . Incredible. The Dolby Atmos actually sounds like I am sitting in front of two speakers (or more). I had to move it around a little bit to find a sweet spot but it is so nice. Frank Sinatra sounds like he's in the room. The bass is full without distortion unless you crank the volume all the way, the clarity is there. The unit is heavy and substantial. I'll be enjoying this for both my computer content and yours as I have the Dot, Alexa, and Echo Plus. 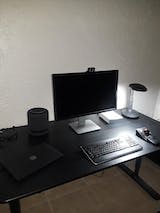 This is by far the best sounding home assistant that is currently on the market. The microphones have been substantially improved so it can pick up your wake word even while the music is playing at a higher level. No more screaming at Alexa in this house! 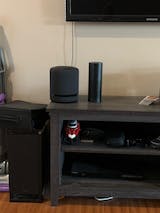 T
T.
The first time I've had an eargasm from a single speaker

The Echo Studio is a one of a kind audio device with a unique sound you've likely never heard before from a standalone speaker.Some thought and engineering was put into this product and it clearly shows with it's sound quality.When I first played a song from the Studio I felt like I had speaker in every direction in my house; almost like being at a concert. To me it sounds better than a stereo pair. I can only imagine the sound quality when paired with a second Studio since one alone has already knocked my socks off.The Echo Studio is by far the largest speaker has released but in the grand scheme it's quite small when compared with a 5.1 stereosystem which that's basically what you're getting here from one Echo Studio speaker with it's 5 mulidirectional internal speakers system.I've read a few critiques about the aesthetics of the Studio with it's gray woven cloth but to me it looks just fine with it's minimalist design. But I didn't buy the Studio to look at, I bought it so I could hear the wonderful sound it emits.Regarding the bass you can feel it in your chest and feet when played at higher volumes. it's somewhat of a perplexing experience because of the Studio's size. What wizardry is in this Echo? I don't know but I don't really care. It does what it does and does it well.To sum things up, this is one superb audio device that truly delivers with immersive sound. If you buy the Echo Studio you will likely be highly impressed for what you're getting at the price point. The Echo Studio has likely paved the way for the next evolution of sound, who knows what the future holds.

A
A.
Beats the Beam!

I had a Sonos beam and sub combo that cost $1,200 and it sounded great but I was never happy with it not being able to be a part of the multi room audio with all of my other echo speakers. I was hoping the Studio might be close enough in sound quality that I could replace Sonos. I purchased two Studios and a sub it has definitely surpassed my expectations. Goodbye Sonos! I feel like our living room is the closest we can get to a movie theater experience without spending thousands of dollars and you can get it all for a little over $500. Sonos is definitely clear and loud but I feel the Atmos and 3D Music add a depth to the sound that the Sonos is missing. It's like a whole new experience watching Jack Ryan with these running Atmos...so good!I didn't have any issues adding the Studios/Sub to a Home Theater group to my Fire TV. All you have to do is make sure the Fire TV and Studios all have the latest firmware. You can check in the Fire TV menu and you can ask the Studios to update the software. I even like how when you increase volume the Fire TV cube and both Studios Alexa indicators light up so you can tell how much you are increasing/decreasing volume. has always provided a great value for their good products at a good price but I feel they have exceeded expectations with the Studio. This is definitely an awesome product for an awesome price!